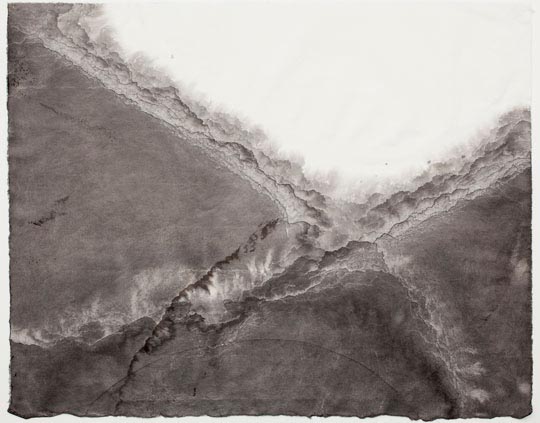 One of many ink on paper sheets by Heather Watkins in her installation, "Gradual Instant"

I'm writing this from memory - my memory of Heather Watkins' installation Gradual Instant at Reed College's Edith Feldenheimer Gallery. I'm torn between wanting to get my thoughts down while they're fresh, and longing to return to the space and write in the presence of the work. It's been several days since I experienced the show, at Watkins' gallery talk with a full house of fellow admirers. It deserves a more private viewing, and I'm determined to return, in spite of the coming onslaught of the TBA Festival and my own studio deadlines between now and September 15.

My first thoughts after viewing Gradual Intent may have been influenced by John Motley's Oregonian review of Watkins' poured ink work at PDX Gallery: "Watkins' project takes its cues from John Cage's methodical use of chance." Even more, in her Reed College show, she embodies Cage's dictum that art should "imitate nature in its manner of operation." Watkins made reference in her gallery talk to natural, geological, cataclysmic forces, and she calls on the natural properties of ink and paper. She enlists capillary action to do its gravity-defying magic, drawing the ink into the fibers of the paper. Then she installs the results in a breathtaking sweep up the wall. The works at Reed don't just look like forms of nature; they are forms of nature, guided by her sensitive hand.

My response is deep and growing. Gradual Intent becomes a metaphor for many things: acceptance, ascension, resurrection, transformation, gravity and lightness, stain, absolution, dissolution, redemption. The actions Watkins employs are suggestive: seep, soak, saturate, stain, swell, absorb, impregnate...  Watkins offers many such lists in a beautiful artist book, Repository, she created to accompany the shows at Reed and PDX. I'm resisting quoting her directly and going with what pops into my head. I think, too, of Richard Serra's Verb List, which I do look up (influenced perhaps by Sarah Horowitz's mention of Serra's prints after Watkins' talk). My suspicion - that Watkins' actions are more subtle than Serra had in mind - is born out. None of the verbs I associate with her work appear in his list. Watkins' actions are not so much actions that she takes, as actions that she allows to happen. Unlike Serra's verbs, enacted by the artist on his materials, Watkins' verbs are ones she invites her materials to enact on each other.

It's a brave move on Watkins' part, to cede so much control to nature. It's successful because of her heartfelt sympathy not just with materials, but with humanity. She's developed this over a lifetime, and I can't help feeling that her already strong intuition has evolved exponentially with her experience of motherhood. Her son is now 19 months old, so she's been in a powerfully altered state for over two years. Not every woman rides the emotional flood that is loosed with pregnancy and motherhood, but Heather is not everywoman. She's summoned the determination and support to continue working through this intense period, and she's turned out work that's every bit as profound as life itself. I'm grateful to her for that, and to Gerri Ondrizek for recognizing this work and bringing it to light in Reed's Art Department Gallery.