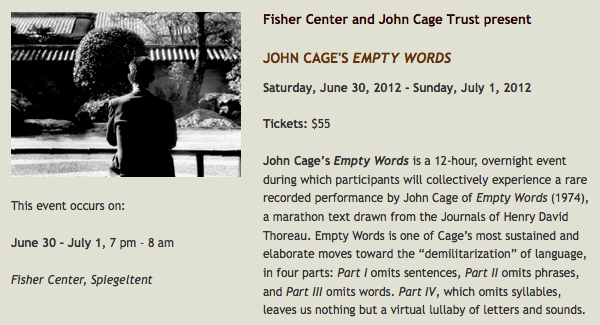 I had the opportunity to revisit that experience last Saturday night, thanks to a recreation of the performance at Bard College's Fisher Center, WGXC's broadcast of that event, and the wonders of live internet streaming. I invited friends again, including two guests from my original party, plus another who'd spent an evening with Cage in the late 1960's. (I still see this as an experience to share with others.)

This time around, we had the benefit of Cage's compilation Empty Words: Writings '73 - '78. This paperback reference includes a complete transcription of the utterances that make up the work: phrases, words, syllables and individual letters from the Journal of Henry David Thoreau. Cage used the chance operations of the I Ching to select bits of text from the Journal, and collaged them—together with periods of silence—into four parts, each two and a half hours long.

Related texts in Cage's book elucidate his interest in Thoreau. In "Preface to 'Lecture on the Weather,'" he calls Thoreau the greatest American who ever lived. Cage points to Thoreau's influence on Ghandi, Martin Luther King, and Cage himself: "Other great men have vision. Thoreau had none. Each day his eyes and ears were open and empty to see and hear the world he lived in. Music, he said, is continuous; only listening is intermittent.... Reading Thoreau's Journal I discover any idea I've ever had worth its salt." [pp. 3-4] In a brief foray into a transcription of his Journal online, I find Thoreau describing the sound of an owl and musing about the way we perceive sound: "pe-pe-ou,... but more of a squeal— & somewhat human. Or do not all strange sounds thrill us as human—till we have learned to refer them to their proper source." [Sep. 3 1854, p. 6] Thoreau's Journal spans a quarter century and fills forty-seven handwritten volumes. How much of it is taken up with sound? If a person wanted to make a representative survey, why not use the I Ching to direct the study?

In "The Future of Music," another text included in the book, we gain an appreciation for what Cage means when he calls his project "the demilitarization of language." Cage credits Thoreau with likening the sound of a sentence to the sound of feet marching, and Norman O. Brown with defining syntax as "the arrangement of the army." [p. 183] He bemoans the state of the world in 1974, and the ineffectiveness of the written word against the powers that be: "Since words, when they communicate, have no effect, it dawns on us that we need a society in which communication is not practiced, in which words become nonsense as they do between lovers, in which words become what they originally were: trees and stars and the rest of primeval environment. The demilitarization of language: a serious musical concern." [p. 184]

While Cage expresses a political motivation behind Empty Words, my interest lies in the sensory and cerebral experience of it. As my friends and I set ourselves adrift in its sounds and silences, we recognize, easily, the many words and phrases in Part I. We imagine we hear language, too, in the sounds that aren't words: Old English, perhaps, and French, Japanese, Sanskrit. If we can't identify a particular foreign language, we hear a made-up one: Cage channeling Jabberwocky. Sometimes it's only through the written text that we register the difference between "Three strong check shirts" and "sf fth ryn dea." I'm sure Cage doesn't mean for us to follow along, but the book offers a reassuring chart for navigating this sea.

Our urge to hear utterance as language remains irrepressible through Part II. After that, we have to find meaning in the absence of words. Part III gets wilder. Words share the stage with sounds like gargling, wailing, and blowing bubbles. Where earlier silences had been broken by the sound of inhalation before speech, sounds now take us by surprise and waken us from a half sleep. Cage's delivery becomes more varied and suggestive. Moments of drama and urgency interrupt his sedate cadence: the animal call of the hunter, the moans of the severely speech-impaired. In the written text we look for clues and find only the italicizing of individual letters to denote this drama. These wild evocations are still rare, and their occasional appearances make us more aware of the relaxed, measured mode of the work as a whole.

Part IV: Words are all but gone now, laying bare the voice. It softens and deeply resonates, melodious. Silences expand, some as long as three minutes. Sounds surround silence, bounding it like a safety net against infinity. For most of the evening, a bad internet connection has forced us to ride herd on the refresh button, making us anxious whenever a quiet stretch gets oddly long. Thankfully, the connection is clear now in the wee hours of the morning (it's 3 am in Oregon), and we can trust these silences. I'm reminded of group meditation, with a leader to signal the end. There's comfort in knowing someone else will end the silence. We fall asleep.

Cage's "demilitarization of language" has taken us on quite a journey, traveling back through the evolution of civilized speech from intelligible to unintelligible to animal: the human animal. He seems to be searching for the essence of the sound that, as Thoreau says, thrills us as human. When he finds it at last, you could call it music.

NOTE: Laura Kuhn, Director of the John Cage Trust, confirmed that Cage performed Empty Words at Christ Cathedral Church in Hartford, Connecticut, on September 25/26, 1981. In her email response to my inquiry, Laura continues, "Cage recounts this event in great detail in a letter to Dr. Walter Harding (Oct. 2, 1981), reporting that macrobiotic food was served by the East-West Restaurant in Middletown, N.Y., and that some 150 attended through the night. He apparently began reading at 9:42 p.m., and at 6:12 a.m. the curtains were opened to let in the first morning light. At 6:42, at dawn, the windows were opened so that the sounds of the outside came into the room. The entire event was broadcast by NPR via satellite to some 27 stations, the farthest away being Juneau, Alaska."